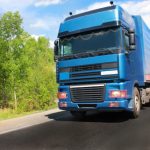 Truck driving as a service and a career has existed since shortly after the use of vehicles became widespread around the end of World War I. Since this time, trucking has grown to become one of the predominant industries in the United States. Today, truck driving is responsible for the delivery of more than half of the raw materials and consumer goods shipped in the U.S., contributing to both the growing job market and the improving economy.

The Birth of Truck Driving

Prior to WWI, most goods were transported across the U.S. via train or horse-drawn carriage. Starting in the 1930s, the use of trucks to transport goods began to increase as the establishment of paved roads became more widespread. In 1933, the American Highway Freight Association and the Federation Trucking Associations of America merged to form American Trucking Associations, which remains the trucking industry’s largest national trade association.

The Establishment of Trucking Regulations

As the trucking industry continued to grow, the need for trucking regulations arose out of public safety concerns for both truckers and other drivers. In 1965, the first hours of service rule was enacted; since then, the hours of service rule has been updated several times. The deregulation of the trucking industry occurred in 1980 with the passage of the Motor Carrier Act of 1980, allowing carriers the right to establish their own rates and reducing the overall cost of consumer goods. In response to growing safety concerns, the Motor Carrier Safety Improvement Act of 1999 established the Federal Motor Carrier Safety Administration to develop and implement strategies for improved safety while on the road.

The trucking industry continues to make history today as a major workforce in the U.S. You can earn your CDL in Arizona to become an important part of this industry by attending HDS Truck Driving Institute of Tucson. Check us out online to find out more about admissions and CDL classes, or feel free to call us at (877) 205-2141 for the answers to your questions about CDL school and truck driving.

Come Drive the Big Rig at our Next Open House!

Learn about a career on the open road. A career with freedom: No boss looking over your shoulder, no cubicles and boring daily routines. Driving lets you see the country on your own schedule and make a great paycheck too. Come see what it feels like to be in the captain’s seat!